The news of the day is that Travis is steadily re-learning how to eat. He had a o.k. day with it. It is a slow and steady progress as his body has gone through such major changes. They started him on 5 cc yesterday and continued to increase it every other feed. He was up to 25 cc tonight when we left him after the 9 pm feed. He only eats what he can and then they put the rest down his NG tube.

Trvis has had some girgling noises in his chest. The doctors say it could be some fluid going down into his lungs or some congestion from the respirator. They want to keep an eye on it. Nicole and I are asking for prayers that this issue is minor and goes away fast.

Nicole and I both got to hold him again today. He has so many wires that it is scary. Well lets pray for a good night and a good Monday. 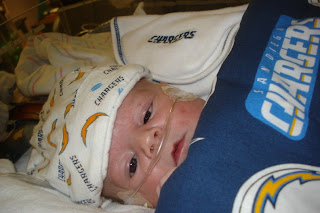 The Lucky Charm is still rolling. Travis has been around for 6 games and 6 Charger victories.
Enough Said!!! 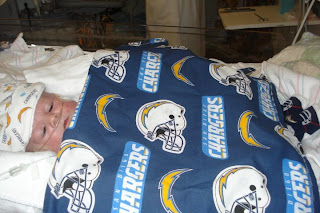 Travis ready from head to toe for the Chargers game. 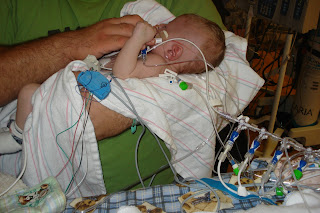 Look at all the wires that Travis still has... 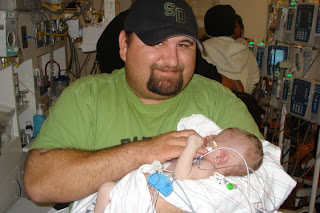