Yesterday we saw a spiritual medium. Below is a smidgen of our experience. If this is not something you personally agree with, please keep it to yourself . I went in skeptical and went out a believer!!!!

So, a friend of mine told me her experience with a medium in LA. His name is Tim Braun (http://www.timbraun.net/). Her experience amazed me so I was intrigued. I ended up booking a “spirit circle” with myself, Roger, my mom, sister, and sister’s wife. After introductions (first names) we sat in a circle and he walked us through a short meditation. Then, he started and addressed my mom. He explained that paternal relatives stand to the left of you, maternal to the right, and immediate family behind you. He said he saw a man behind her……it was my dad (her ex-husband). He conveyed my dad’s sass and apologized for not being able to say goodbye. Tim, the medium, gave a lot of information about his death/life, his personality, and the way he dressed. He also said that my dad kept walking back and forth between my mom and Roger (note: He died before I met Roger). Tim said he was slapping Roger on the leg and giving his approval. Then Tim mentioned a maternal grandmother. He didn’t have a lot of information about her but said she talked a lot (which matched her personality). Then, he turned to me. He asked my name again and said he saw a young spirit running circles around me but didn’t know why. He asked if anyone invited a child in. He went on to tell us a lot about Travis (he never said his name though). He said Travis loved us…he said Travis kept touching his head and saying he was okay. Tim said he felt like it was a headache or swelling…..he kept going back to that and he also said that Travis’ death had something to go with not being able to breathe……like water in his lungs. Early on he said Travis was holding his arms up like showing his muscles. Later on Tim mentioned that it was more clear and he was showing his heart and chest were good. He also told us that Travis had a sensitive feminine spirit and was a sweetie. He told us what we already knew, that Travis LOVED water. He loved to swim. He told us that Travis misses his dog (just one of them). He showed us the exact size of our dog and said that the dog can see him and they play together. He said that the dog is sad/sullen because he misses Travis and that the dog’s health is suffering. He told us that when our dog gets sad to pet him and tell him we miss Travis too and that will add some years to his life. He kept telling us that Travis knew what he wanted and kept going to the fan in the room and putting his face in front of it and ignoring him. Tim told us that Travis is not angry with anyone……he said he is not angry with hospital, doctor, etc. He repeatedly told me there was nothing I could do. Tim told exact times he passed away and when we found out. It was crazy. He told us that Roger’s grandmother was the spirit to guide him in. He told us that other spirits were trying to talk to us but my dad’s spirit was telling him to focus on Travis. He continued to go on and on about his head swelling and that Travis was happy and thankful to have lived as long as he did. Tim told us that Travis had 2 extra months and that he was supposed to go 6-8 weeks before his death. Tim told me Travis wanted me to finish the book I am reading (titled Growing Up In Heaven). He also told us that we were so selfless and everything stopped for Travis so he was giving back what we gave him. Tim conveyed messages of caution to Roger. Tim told us that Roger should have died already, in a car accident when he was younger. Tim said he fell asleep at the wheel and that Travis is telling him he needs to be extra careful driving and never ride on a motorcycle or mo-ped. Tim said Travis wanted me to improve my posture (weird!). I’ve had spinal surgeries….so maybe that is what that was all about. He told my mom that Travis is telling her to stay away from smoke and that it is bad. Tim told my sister to take care of her right knee (she’s had 4 surgeries on it). Tim spoke to my mom and conveyed that she was a pushover for Travis (she was) and she doted on every whimper. He also told my mom “You have one remaining granddaughter, right?” Yes. Then he said that Travis was asking to play with her. He said when she is reaching out to midair she is playing with him and trying to get something he has. Tim also told us that Travis is playing with a spirit that has not yet been born and that it will be soon…..to us. He said that this child will have a lot of the same characteristics as Travis. He said Travis was happy and with my dad and Roger’s grandma.

So much more was said. We have it all on tape. He also contacted Roger’s grandmother, Deb’s birth father and her old dog, and my paternal grandpa. We ended with a meditation and goodbyes. I asked if we could do it again and he suggested Roger and I go in for a private reading. I am going to!!! I was skeptical before but I am sold. It was amazing and I feel some peace knowing that Travis can hear me and he is around. I just miss him so much! I am so happy he is happy and with my dad.

‎"Make yourself familiar with the angels, and behold them  frequently in spirit; for without being seen, they are present with you." -Saint Francis de Sales

Every night I rock Addie to sleep in Travis' room. We light a candle, sit on his floor, read some books, and then she drinks a bottle as I rock her and think.
Tonight I saw a cobweb from his bed to wall.
A FUCKING cobweb....on my son's bed. Because he doesn't sleep there.....because it isn't used....because he is dead.
This is all really unfair. I continue to wonder....why us? Why him?
We received a couple of handmade quilts recently for Addie. They are beautiful and have her BroBro's pictures on them and special quilt squares that will allow her to remember special memories we share with him. They are gorgeous. It pains me, however, to think of Addie as a 10 year old asking about her sweet brother. What do you say? How can you explain all this to a child?
The other day I as looking for the sheet for our pack and play. I opened Travis' closet and saw his brown striped outfit in his hamper. It is the last thing (besides pj's) that he wore. We haven't washed it...I just can't. It's unbelievably painful to look at that outfit and remember all the fun we had the night before his surgery....the last night his would ever see his sister. The last night we would ever se "him" (acting normally at home). 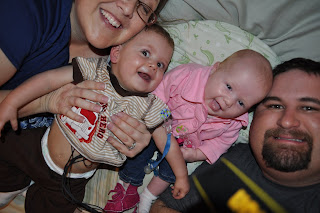 My heart just aches. I am just so broken. 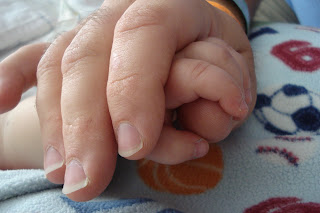