We were ready to go home tomorrow, but the plan has changed again.
At about 2:30 they took Travis back to the operating room to put in his PICC line. They had to put him under anesthesia again, which meant he had to get intubated again. The good news is that he had no ill effects after going through the 1 hour procedure. The bad news is that they could not get the PICC line in. The doctor who was trying to put in the PICC line felt really bad. Travis has always been difficult with getting an I.V. line or anything that has to do with poking him with a needle. Travis currently has a Trans Thoracic line in that they can give all of his meds. So they will keep that in.
What this means for us is that we will be here until the antibiotics run there 10 day course. That means Sunday night, but because the last dose will be late that night we will be staying an extra night. So possible discharge on Monday morning.
We are still worried about Travis not eating from the bottle very well. The doctors continue to reassure us that they are not worried, but we are. The only thing he likes is bananas (See Pictures Below). He continues to be fussy for long periods of time. Part of his problem is his boredom. We both take him on wagon rides around the IMU. Tonight he totally lost it and cried for a long time in the room. I tried to console him and nothing worked. I then picked him up and took him outside the room and amazingly he was happy as ever. We walked around the IMU for about 20 minutes and finally he went to sleep.
Hopefully we have a couple of quiet nights and Travis will lose some of his fussiness and get back to being the happiest baby on the block. 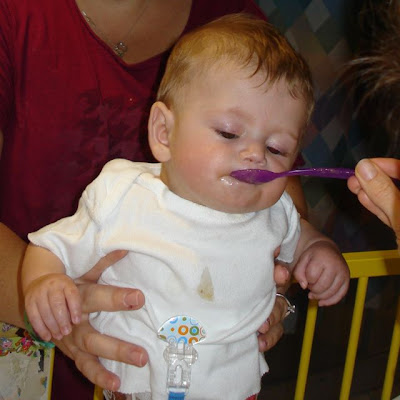 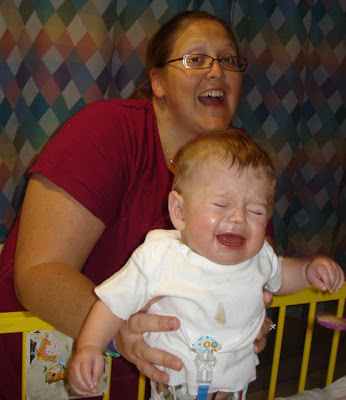 Nicole being funny as Travis shows off his fussy side. 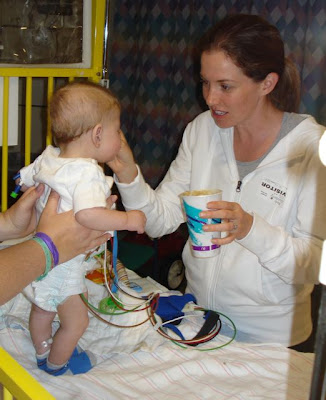 Travis enjoyed his bananas much better standing up. 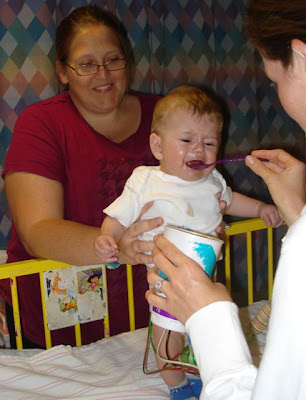 Our friend Jen was feeding Travis, but was a little slow for Travis' liking.
Posted by Coach DiCarlo at 8:59 PM