Today has been a good day so far. Since I got here at 3:30am he has had the following removed: his catheter, an arterial line in his groin, and they stopped his epinephrine and another drip medicine. He was even cleared to try clear liquids! Once he can take the liquids well he will be able to get his chest tubes out. That will make him a whole lot comfortable. The pacemaker doctors came in today to give us a tutorial and they eve gave us a little sample pacemaker so Travis can see what is inside of him. Maybe he can bring it to show and tell at school eventually. They are doing a breathing treatment right now and let me tell you he HATES that. He gets so grumpy when they suction out his lungs!
Here is a pic from a little bit ago: 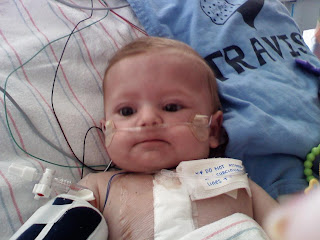