1. Travis has been doing so well since he has been home. It is hard to believe that he just had heart surgery a few weeks ago. He acts so normal! He is one tough little cookie! We went to the cardiologist on Friday and he did an ecco, an x-ray and an EKG. After reviewing all that and examining Travis he was happy with what he saw. He said Travis' heart function is looking real good. He mentioned that he does see a leaky valve but that is something they saw before and they will continue to monitor it. Dr. Levy said that he is going to have a clinic once a month in San Marcos which is FABULOUS for us as this will save us about 40 minutes when we head to his appointments. We will be going to our first pacemaker clinic at the end of June. We have noticed that Travis has been much more sweaty than he was before so Dr. levy decided to put him back on Digoxin (a heart med that helps the heart squeeze) to see if that helps. He was on Digoxin pre-op but they thought he did not need it any longer. Hopefully, that will alleviate the sweating a bit.
2. My mom participated in the Fallbrook Relay for Life today and we stopped by to say hi. Travis was a hit with all her friends and we even got some cool photos taken at one of the onsite fundraisers!! 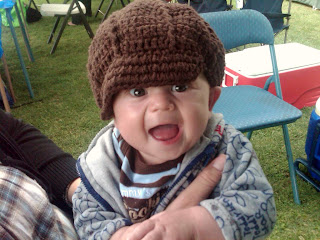 Travis models his new hat that mommy bought on Etsy. 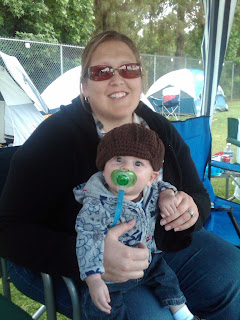 Still in LOVE with his paci! 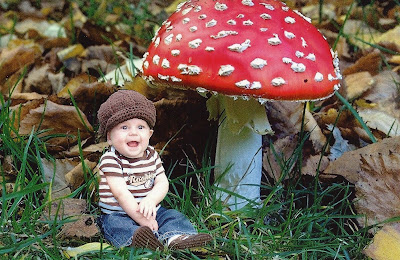 He is seriously the cutest thing. Isn't this a cool shot? LOVE it!!! 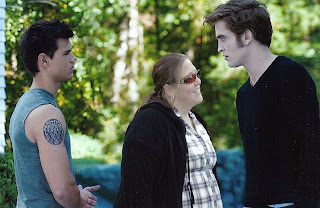 Mommy took one....just for fun. Can you tell what team I am on?
3. Travis has been eating like CRAZY since we got home from the hospital and it has been paying off. He tipped the scale at 14lbs 3oz today before his bath!! Here are some shots of him eating....he LOVES solids! 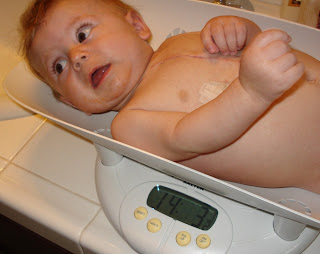 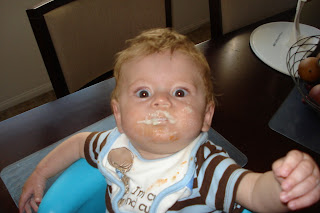 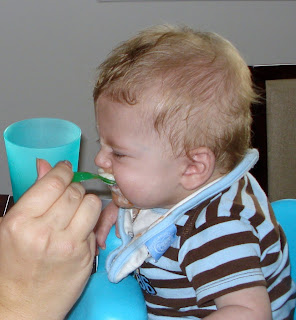 He doesn't look happy here but he was mashing his face into the spoon because I wasn't feeding him fast enough!! :) 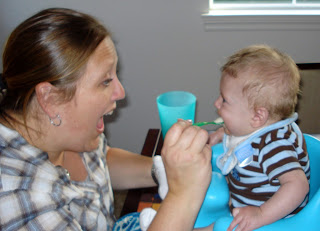 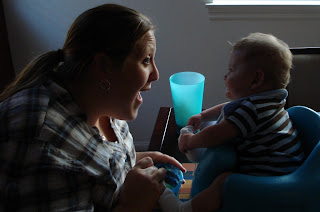 Travis was talking up a storm today in between bites! Too cute!
4. Travis is getting his first tooth!! We can see (and feel) the little nub coming up through his gums. As such, he has been getting quite cranky! He is also very clingy lately which we are not sure if that is caused by the tooth or from the surgery. When he is super cranky, daddy likes to take him outside to look at trees. Today, he surrendered and fell asleep on their walk. 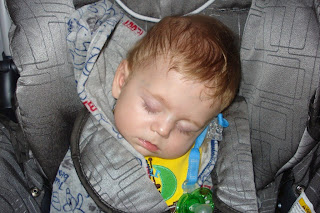 5. Just had to throw this one in for fun because he is so darn cute! He LOVES to play with this blanket. I will lay him on the floor and fan it out above him slowly moving it down to cover his head and he will just crack up!!! He thinks mommy is funny when she does this. Usually, daddy is the only one who can get Travis to crack up! 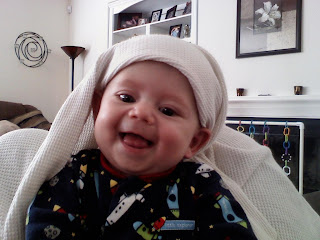 6. It's official, we are moving (as if we need ANOTHER thing on our plate, right?). Our house is in escrow and expected to close on the 25th of June. It is definitely overwhelming but we think this is the best decision for all of us. We will be moving to Fallbrook, just off the 15 freeway at the 76. There is a pocket of houses there in an area they call Lake Rancho Viejo. We get the keys to our new place on June 1st and we will slowly move in. Let us know if you have a passion for hauling boxes!!! :)
Posted by Coach DiCarlo at 8:35 PM