Update and some pictures

We are getting really close to going home. Travis is eating super well and we will be getting discharged in the very near future. We are scared that we will jinx it or something funky will go on before he goes home. So we will wait until he is in the car before announcing his official discharge from the hospital. I will say that the car is packed, the car seat is in and we are ready to go.
On another note, I had my high school football banquet today. I coached football all the way up to his birth on October 23rd and snuck out of the hospital to coach the last week of the season. I cannot believe how many parents, players, and coaches that came up to me and said they were following Travis's journey via the blog. At the end of the banquet a couple of parents graciously gave me some money for some of the medical expenses that won't be covered by insurance. A special thanks to the Carter, Cochrane, Olson and Peek family. Also, Janet Nagle (the mom of one of my football players) came up to me to let me know that she collected items for the Ronald McDonald's House in the name of Travis. She made up a flyer and went around the neighborhood to collect toys, food, and other items that will be used at the house. I continue to be overwhelmed with the generosity of people. It is so hard to express in words the gratitude my wife and I have towards the families that have supported us during this time.
All we can say now is THANK YOU. 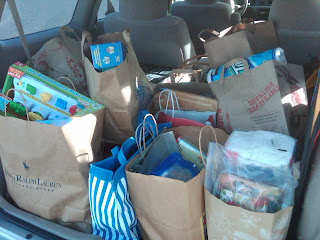 Donations collected from the Nagle family for the Ronald McDonald's House 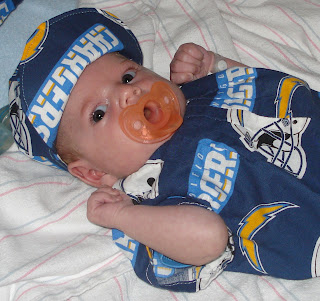 Travis was a little worried while watching the game today. 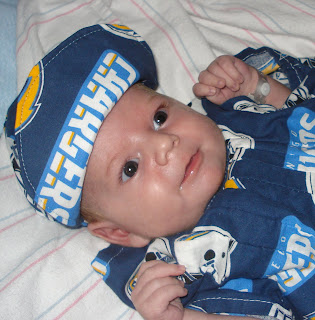 But enjoyed the second half and another Charger Win!!! 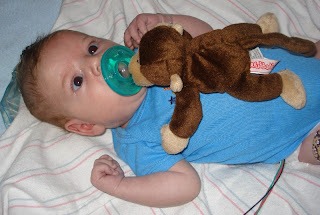 This is Travis' new toy/pacifier. It is called a wubanab. It holds his pacifier in place.
Posted by Coach DiCarlo at 8:21 PM