Troublesome News from the Cardiologist

We had Travis' 12 month cardiology appointment with Dr. Levy today. We got some good news as well as some news that worries us. First the positives, even though his weight gain has stalled a little bit since he has been crawling, he still is following his own little curve and Dr. Levy was happy with that. His weight although it is improving, it is still under 1 percentile mark. He is officially on the percentile chart for length at 25 percent.
They did an echo on his heart and Dr. Levy said overall his heart function is still good. However, they were finally able to get a good picture of his pulmonary branches to the lungs. Unfortunately, the right pulmonary branch has some stenosis (narrowing) that Dr. Levy is concerned with. His plan right now is to bring the pictures to the attention of the cardiac team at Children's and get some other opinions on what interventions they may need to do. Originally, the plan was for Travis to get to 17-20 months old and then do a combined Glenn/Fontan procedure. However, if his pulmonary branches are not "big and juicy" enough, they would not be able to do the Fontan. Therefore, Dr. Levy is thinking that Travis may need to go in for a heart catheterization in the next month or so. A heart cath would give them some more definitive answers about the degree of narrowing and what interventions they need. It may be the case that the branches just need to be ballooned open in the cath lab. Worst case scenario is that the narrowing is extensive (long) and would need to be surgically stented. Dr. Levy though that it is possible that the narrowing is caused by scar tissue from when he had his first surgery and they had put the bands around this part of his arteries. If that is the case, it would probably be pretty narrow and HOPEFULLY easily repaired. Dr. Levy is going to contact Dr. Lamberti his team and get back to us by the end of the week.
As you can imagine, Roger and I are a little panicked. Like we said, it is sooo easy to forget the extent of his medical problems when he is just like a normal little dude in so many ways. We were just so used to getting good reports that we were kind of shocked. Travis never really wants to follow the "normal" path for this heart defect so I suppose we should have been prepared for another snafu....but, really, how could you prepare for bad news.
We are trying not to focus on the "what if's" and instead pray that they will be able to repair the narrowing in the cath lab and that it would be an easy fix. Wishing we didn't have to think about this now as we really are looking forward to our warrior turning one year old in just four days!!!
We will post more when we here back from Dr. Levy with a plan. Pray for our little guy! 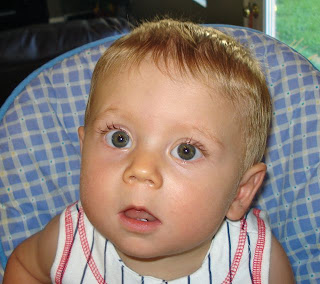 Posted by Coach DiCarlo at 8:25 PM